What is rheumatoid arthritis?

Rheumatoid arthritis (RA) is a disease that produces pain, swelling and stiffness in the joints. The specific cause of this condition remains unknown, however genetic, hormonal, infectious and environmental factors have been linked to its development. It a type of autoimmune disease, meaning there is an error in the system that protects us from infections, where the system now attacks the joints. Approximately 1.3 million adults in the United States have RA. This type of arthritis is more common in women. It usually starts around the fourth and six decade of life, however it can occur at any age.

What are the symptoms of RA?

RA usually affects the small joints in the fingers, wrists and feet. It predominantly affects both sides of the body at the same time. Although it usually starts in the small joints of the fingers and toes, it can affect any of the joints. In addition, it may also begin in a single joint such as the knee or the shoulder. The onset of joint symptoms is usually gradually. These symptoms include joint pain, redness, warmth to the touch, and joint swelling. The joint stiffness is usually worse in the mornings and tends to last longer than 1 hour. Other symptoms of RA include tiredness, low grade fevers, loss of appetitive, nodules in the skin, and dryness of eyes. RA affects not only the joints, but other parts of the body as well, such as the eyes, heart, and lungs. 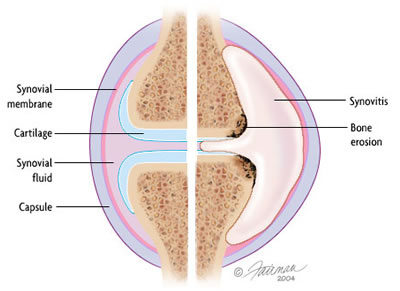 How is RA diagnosed?

The diagnosis of RA is based on a composite of factors including the characteristic signs and symptoms of the condition, the findings on physical examination, the results of the laboratory tests and the imaging results (including x-rays, ultrasound, and MRI). The initial symptoms of the condition may be very subtle making it especially difficult to diagnose in its early stages. 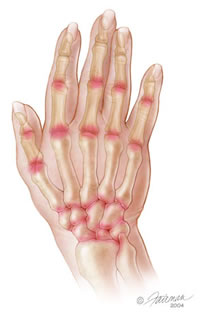 Rheumatoid arthritis affects the wrist and the small joints of the hand, including the knuckles and the middle joints of the fingers.
The structure of the normal joint is shown on the left. On the right side is the joint with rheumatoid arthritis. RA causes pain and swelling of the synovium (the tissue that lines the joint). This can make cartilage (the tissue that cushions between joints) and bone wear away (erosion).